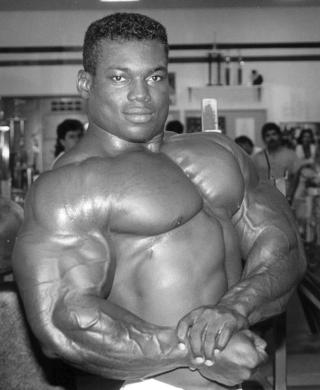 Q. Who are your role models?

A. My parents are my role model for giving me everything necessary to be prepared for the many challenges that life has to bring.

A. First to clarify this statement: I have never said that I consume 30,000 calories daily. My statement was taken out of context by a major magazine's quack editor who wanted to make a name for himself by creating a controversy. His original question was, "What is the most calories you've ever consumed in a day?" I answered that I had once consumed close to 30,000 calories when I ate Caribbean and African cuisine which can be extremely high in calories. I have never claimed to eat 30,000 calories on a daily basis.

This misinformation is just another reason why you should never believe everything you read in the magazine. I actually consume anywhere from 8,000 to 12,000 calories a day depending on my training exertion for that day.

Q. Why don't you compete?

A. First, I believe that every human being should build their physique the way they seem fit instead of structuring their physique to suit the expectations of judges. I believe that some professional have met untimely deaths through the unrealistic pursuit of perfection, trying to attain the kind of physique expected from them by the bodybuilding judges. In the other word, some bodybuilders had became trophy to the bodybuilding establishment while in pursuit of trophy.

Q. What do you eat for breakfast and before working out?

A. I believe in doing my first workout in the morning on an empty stomach because a hungry man is an angry man. Angers often helps fuels my workout. After training I'll mix 16 ounces of unsweetened 100% apple sauce with Rebel Nutrition Ionic Whey to feed my muscles. Then I'll take an hour siesta or nap to let my food digest before tending to my other daily activities.

Q. Who are your favorite bodybuilders?

Q. How much is Big Vic weighing nowadays?

Q. Why do most professional bodybuilders lie about how much money they earn when we all know that they are the most under paid athletes in the world?

A. You see! Some bodybuilders are insecure and delusional. They would rather attack each other than challenge the established magazines and promoters that have made them a laughing stock to the public. Most professional bodybuilders are practically working for free as "slave labor", jeopardizing their health and lives for their masters. So they would rather lie to the public about their earnings than form a union for better and more stable pay. Most have mastered the art of ass kissing into order to win shows or earn peanuts.

Q. We all know Vic is the thickest and most massive bodybuilder on Earth, and has shape, size and symmetry. So what about claims of Greg Kovacs being the largest bodybuilders on earth?

A. I've met Greg Kovacs, and he seems like a nice polite individual. I do not think Greg believes that he is the largest bodybuilder in the world, even if magazines promote him that way. Greg Kovacs is 6'4" tall and weighs 280 pounds in shape. Off season he towers at about 350 pounds, with half of that weigh in his gut and hips. I am 5'10" tall and often reach 320 pounds in shape, and 360 to 370 pounds off season. Do the math: 40 more in-shape pounds with 6 inches less height. My biceps and triceps dwarf Greg's, my chest and pecs makes his look like a bird. Let's not even mention my back, calves, hamstrings, and thighs. I am not arrogant but sincere. So when Greg claims to be the "Largest Bodybuilder on Earth" he might be claiming his guts and hips. You see-- the mice will play when the cat is away.

Q. Why wouldn't the bodybuilding establishment allow bodybuilders to form a union? After all, the NFL, NBA, and NBL players have unions.

A. This is a very good question with a simple answer. The establishment rule is control, power and slavery. The IFBB and other bodybuilding promoters find it beneficial and profitable to control unorganized, mindless, insecure, robotic zombies that we have today in bodybuilding. Bodybuilding unionization would help the professional bodybuilders ask for more money, respect and dignity-- things that are lacking among most competing professional bodybuilders today. So in order to make bodybuilders work for free, the establishment must tap into their insecurity to keep them down and feeling grateful for crumbs.

Q. How will history judge Joe Weider in regards to his legacy and the sport of bodybuilding?

A. History will want to know if he shared his wealth with those bodybuilder athletes that helped him in growing his massive publishing and product empire. I think Joe Weider's legacy will be judged by the subservient standard of living endured by all professional bodybuilders both past and present.

Q. Why is bodybuilding not as popular as professional wrestling?

Q. Is there anything else you'd like to add?

A. For those of you that have been bombarding me for personal training and online consultation on how to put on pure mass, Now is your chance. I'm finally available. Go to https://www.vicrichards.com/training.htm