Chrissy May Stats and Bio 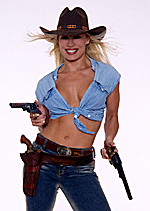 
I grew up in a suburb 45 minutes west of Chicago, IL. As a youngster I enjoyed every activity and sport possible. I attended St. Mary's Catholic Grade School for 8 years, where I got involved with basketball, volleyball, track and cheerleading. It wasn't until I was almost 12 years old that I found my true passion, figure-skating. What once started out as a weekly activity, eventually turned into an everyday affair. I competed all over for many years and was involved in the yearly ice-show at my local rink. I've had almost every injury possible, the biggest being breaking my right leg while getting a few pointers from 1992 Olympic Champion, Victor Petrenko. Eventually the injuries took their toll and so I made the decision to call it quits. That was the end to my skating career of nearly 8 years, and the beginning to a very confusing time.

I made some poor decisions and didn't have much direction in life. I attended Community College for a while and just felt I wanted to do more. I made a huge decision in the spring of 1999 to relocate to Scottsdale, Arizona and get a degree in Massage Therapy. I've always wanted to help people, especially when I could relieve pain they've had from chronic injuries. While in Scottsdale, I got bit by the competitive bug again and had to find an outlet. I remembered watching a Fitness America Pageant on ESPN years back and decided to give it a try. After receiving poor advice from unqualified trainers, I educated myself and went for my first regional on my own. My first time competing I placed an unexpected 4th out of 25 girls at regionals, which qualified me for Nationals. I ended up placing a respectable top 40 finish out of nearly 100 girls! So in the summer of 2001, I decided to attain a knowledgeable trainer and get down to business. I worked so hard at achieving a higher level of excellence, yet that season just wasn't meant to be. Two weeks before my 2nd regionals I came down from a back tuck and tore my ACL and meniscus, which eventually put me out of competition for 1 1/2 years. I was devastated. I had to have 2 major knee surgeries and many months of therapy to get back to a normal level of health.

What once seemed like the end of the world has now been made more clear to me. I've had time to reevaluate my life and what direction I want it to go. I'm the healthiest I've ever been. I know now that I can accomplish anything I want through hard work and dedication.

Being out of competition made me focus on other things besides fitness. I decided to pursue my dream of becoming an actress. I'm getting my feet wet and will see where it takes me.

Fitness is a part of me and I will compete as long as I am able. It has taught me to live a healthier, balanced lifestyle. This was instilled in me as a youngster but lost for some time as a young adult. I am now back to a healthier lifestyle and I am stronger and more determined than ever before.