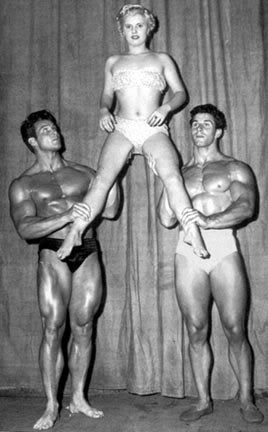 Bodybuilding in the 1950s

The 1950s saw John Grimek step away from the central role in the sport as other new faces emerged. Again, there was a power vs. classical style split. This was found in the dynamic duo of screen – Reg Park and Steve Reeves.

Both men built outstanding physiques – so much so that they became movie stars to boot. Reeves had a classic physique with lean lines and perfect proportions. Park, like Grimek before him, was thick, rugged and very powerful.

Reeves trained three times a week, working the entire body in a session. He used some unique training exercises and techniques, such as lowering the bar slower than he lifted it on curls. He was known for having the same size calves, neck and biceps – all 18+ inches. It didn't hurt that he was handsome as well.

Park lifted more than did Reeves, and he built an incredibly strong and thick physique. Park could lift very heavy weight loads and trained frequently with heavy duty weights.

Being in movies allowed these two top stars of the 50's to push bodybuilding out to the masses in a way that it had never been seen before and gained an entirely new level of interest from the public that would allow for an even bigger surge into the next decade.