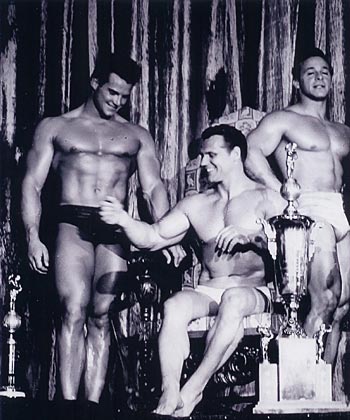 Bodybuilding in the 1940s

The 1940's were a key era in bodybuilding and may have been the high water mark for non-chemical assisted training. The decades that followed saw the introduction of steroids and like baseball, there was no way to know just who was and wasn't using them. That wasn't true in the 1940s as the drugs didn't arrive yet. So the bodybuilders from this time frame were the real deal.

And the king of the hill was John Grimek. Grimek was the top bodybuilder of the 1940's, a perennial Mr. America when that slot was the top position in the bodybuilding world. Grimek was a powerful bodybuilder, using heavy weight loads and building a thick, shapely physique using a fairly basic, heavy training approach. Although this would seem common today, it was new to that era.

The aesthetic side of bodybuilding also had its champion, Clancy Ross. Not as powerful or bulky as Grimek, he did have the shape and size that started to become unique to bodybuilding training.

Although the Mr. America competition was the top title in the land, change was afoot as Canada's Weider brothers, Ben and Joe, launched a professional organization that was small at the time but would eventually come to dominate the entire planet. This juggernaut was the IFBB, which emerged with its first competition in the late 40's.

The 40's were the era when the use of weights came to the forefront as the premium manner in which to build muscle fast.